A Dictionary of Egyptian Arabic. Arabic-English 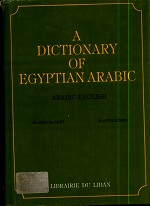 This dictionary is intended to satisfy a longstanding need on the part of speakers of English for a dictionary with which to comprehend Egyptian Arabic. The language described here is essentially spoken language. Egyptian Arabic is the native tongue of over forty-five million people who constitute just under one third of the Arabic-speaking world and is the most widely understood form of regional Arabic because of Egypt's influential cultural and political role as an Arab state.
The language described here is essentially spoken language and, as such, it may be contrasted with formal written language.
The entries have been drafted with the primary purpose of fulfilling the needs of an English-speaking user who requires a general, overall-desc~iptive, synchronic, comprehension dictionary of Egyptian Arabic at all levels of society. As an overall-descriptive synchronic dictionary, it is intended to describe the language as it is now, rather than as it was, as it may be in the future, or as some would like it to be. Particular importance has been attached to the provision of numerous examples, both transparent in meaning and non-transparent.