The American Heritage Dictionary of the English Language

The goal of the Dictionary is to provide the user with comprehension and appreciation of the language in a readable manner.
The pages of the Third Edition, a lexicon of more than 200,000 boldface forms, hundreds of thousands of meanings, and nearly 4,000 pieces of art, reflect the rich and varied texture of American English as it has been used over time by a broad group of educated speakers.
The A-Z vocabulary, containing more than 16,000 words and meanings new to this Edition, is a comprehensive, detailed record of the language. Use of citations allowed the editors to identify new words and new meanings, identify levels of usage, and select more than 4,000 quoted illustrations from nearly 2,000 sources for use in exemplifying entry words in printed context.
The Third Edition contains more than 500 notes and comments on matters of grammar, diction, pronunciation, and levels and nuances of usage.
A great many Modern English words can be traced to the reconstructed ancestral language called Proto-Indo-European. The etymologies in the Third Edition, like those in the First, trace many words to their earliest ascertainable origins, usually in Proto-Indo-European, by means of cross-references to a new and thoroughly revised Appendix of Indo-European Roots. The Appendix, in a major departure from previous style, gives the root followed by a brief gloss and a list of some of the Modern English words derived from it. 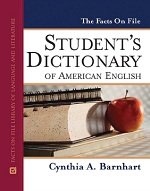 The Facts On File Student's Dictionary of American English
Cynthia A. Barnhart

The Facts On File Student's Dictionary of American English is designed to provide the basic information necessary to be able to understand a meaning, desipher a pronunciation, make a correct syllable break, and employ vocabulary appropriate to particular situation. Its modern entry list of about 90,000 words includes the vocabulary most of us use every day in ordinary writing and encounter in reading a newspaper, novel, magazine, or online article. It also includes a selection of widely used new terms in English from science and technology and contemporary American culture. 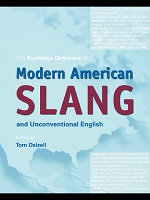 The Routledge Dictionary of Modern American Slang and Unconventional English offers the ultimate record of modern, post-WW2 American slang.
The 25,000 entries are accompanied by citations that authenticate the words as well as offer lively examples of usage from popular literature, newspapers, magazines, movies, television shows, musical lyrics, and Internet user groups. Etymology, cultural context, country of origin and the date the word was first used are also provided.

A Concise Etymological Dictionary of the English Language